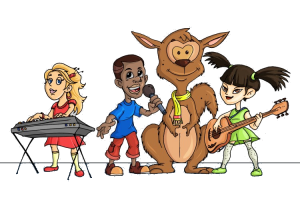 Nursery rhymes have played an important role in the nurturing, growth and entertainment of babies and pre-school children for centuries. The tradition of and singing and dancing to Mother Goose and other nursery rhymes continues to be an important part of child-rearing, one that’s passed down from one generation to the next.

Most nursery rhymes originated in the 16th, 17th and 18th centuries. They were often commentaries on life and politics in England and other countries. These early rhymes became a safe way for people to voice their fears and concerns, and to poke fun at the rich and powerful.

Today, nursery rhymes are used not only to entertain and stimulate a child’s imagination, but have also become an integral part of their education through their ability to promote rhyming, literacy and language skills, along with the joys of music and dance – all through easy to remember musical rhymes.

Why Our Kids Nursery Rhymes are Different

There are many nursery rhyme CDs on the market today. So what makes ours different?

Ours are performed by The D&L Crew. The D&L Crew have taken traditional nursery rhymes and created new modern arrangements, then jazzed them up by adding rhythms and beats from around the world.

Whether it’s Itsy Bitsy Spider to exotic African rhythms or Jack and Jill with the pulsating beat of a Brazilian samba. The D&L Crew put a completely unique spin on these traditional songs. Watch your children get up and dance to the irresistible beat of these tunes while they sing along to the same lyrics both of you have grown to love.

Visit The D&L Crew website to experience the best kids nursery rhymes – listen to their music, watch their videos, and meet Trixie – Keyboards & Vocals, Mic – Vocals & Good Looks! Kai – Vocals & Guitar, and a big furry kangaroo… His name is Joey Hopkinson, no one is quite sure what he does!!!